Every Wednesday we are sprinting on Plone 6 Classic topics, like the finalization of the Bootstrap 5 templates, the modernization of Mockup/Patterslib supporting ES6 and the removal of RequireJS from the resource registry.

The goal is to archive a classic UI for Plone 6, which will be easier to handle and manage for the years to come. Integration of addon's will be pain free again and with standardized Bootstrap templates, the theming easier and more accessible for everybody how is familiar with Bootstrap.

Help is very welcome, anything from improving layout (CSS and markup) to modernizing the Mockup/Patternslib JavaScript. Even if you are not a developer, you can help with your ideas how to improve UI parts of Plone 6 Classic.

Join a WebRTC video conference powered by the Jitsi Videobridge

we are also on Discord in the Plone Classic UI or ES6/Mockup channels:

Discord - A New Way to Chat with Friends & Communities

Discord is the easiest way to communicate over voice, video, and text. Chat, hang out, and stay close with your friends and communities.

An idea could be to have the "was called" personaltool topbar back, like plone.org now has. Could be empty in the index.html with the ul pulling values from manifest.cfg:

This toolbar can very useful for institutional sites, for example.

Just join in so we can discuss your ideas. From my perspective regarding the feature with the top-bar: this sounds like an excellent use case to provide this as an add-on first.

if you have questions or ideas for bobtemplates.plone you are right here and very welcome. I've done most of the development in past year's and happy to have more people on board using and improving it.

I wouldn’t use diazo (theme parameters) for this kind of configuration. We usually use a custom action category and then style the markup either in a custom template or use an action portlet which is then transformed via diazo.

As an example: LS-DYNA and services from DYNAmore Website 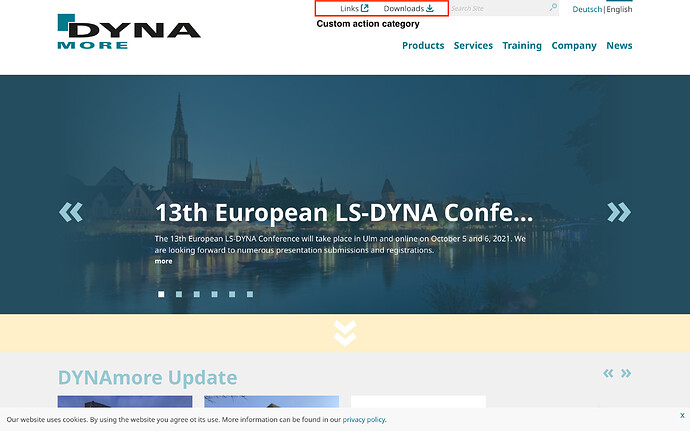 The actions control panel doesn’t allow setting images/icons, but in the ZMI you can still do this. For the header links in that case we use SVGs which are linked from inside the template. In the footer the icons are coming from the action config, so they can be adjusted TTW. 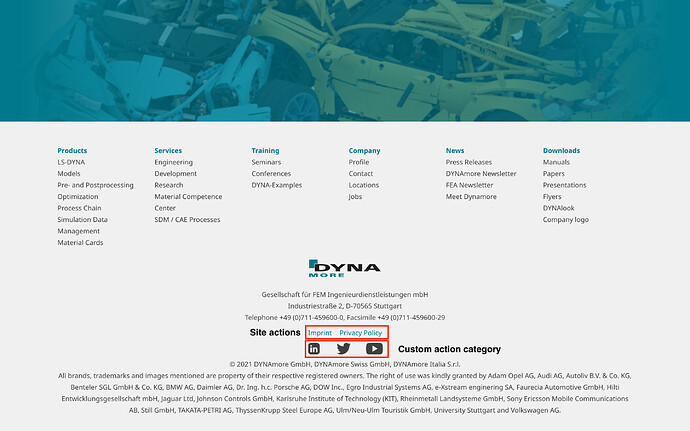 Time is scarce these days for me, but I'm really interested in the JS modernization. Is the goal to be able to use a plain JS development path? I.e. that one can only with webpack, or similar tools, build the JS/CSS and then generate the bundles/files in a way that plone understands?

Hi @gforcada, we have most of the patterns in Mockup refactured from using requireJS to plain ES6 modules. Patterslib it self was done a while ago by @thet.
We are currently working on the details of some patterns, layout fixes, dynamic loading of libraries when needed and refactoring of the related-items/content-browser integration in tinymce. Everything is plain JS, we use webpack to bundle it and deploy it in plone.staticresources. Since the whole Mockup bundle will be much smaller when we are done, it's not a big deal to load the whole thing in one bundle. Most of the dendencies can be loaded async when the pattern is used somewhere.

One can also easily take all the resources and create a custom project based bundle. Patterslib/Mockup is just resources in node_modules and addons could be extracted from the resource registry like @datakurre and others did already.

If you have ideas or wishes, let us know.

If you have ideas or wishes, let us know.

Is there something I can install and look at what is done so far?

possibly here or the coredev buildout

for the ES6 dev we use following PLIP config in buildout.coredev:

Right now there some icons missing in the toolbar and some patterns are missing at least styles. The icons are WIP, we need to refacture the icons to use the new Plone 6 icon resolver.

Thanks for the explanation @MrTango

Yes, that's mostly what I'm interested in: an easy way to bundle the assets myself and, if possible, avoid having to rely on the plone webpack plugin. We are using it, but it feels brittle, to say the least.

Or what is the story for my use case?

sorry for asking so much, but I guess this might be a common use case: I'm using Plone, and have my own theme, and for this or that reason I want to add some minimal/big changes on official JS/CSS code.

If, indeed, the goal is to bundle Plone official JS/CSS as a node module, then I guess that the standard(?) way to override JS/CSS files on node world would work (no idea how is that done, but I guess it is possible).

I see that on your last reply you mention the new Plone 6 icon resolver... so I'm not so sure about my paragraph just above then

Last, though it should be on every paragraph: million thanks for the work on keeping the Plone Classic alive and working!

Not everyone wants/can move to volto.

The theme is still separate from the rest, but it will be easier for you to overwrite styles in Mockup patterns, since we gave up the isolation. The patterns are using the same bootstrap styles you have in the theme. Or if you don't use a bootstrap based theme, you can style it in a diffrent way or combine using the boostrap styles for the patterns and have your own styles for the general layout.

Staticresources contains the core resources in one or more bundles, as it is in Plone 5.2. It's not final, but we will properly have a webpack config in this package to build it. But most of the components are part of mockup where sofar we have the main webpack config to bundle them. Since patternslib is already available as npm package, we could do the same with mockup, so that one can include them easily in webpack or other bundlers and bundle them together with other project related resources.

All resources are still registered in the resource registry similar to who it was in Plone 4.
So we will have only bundles, which are either plain css/js or somehow compiled outsite of Plone before. Overriding existing CSS is not hard, but if you want to change JS components, you have to replace them with you own version. We might decouple some patterns into separate npm package in the process, so it will be easier to replace or improve them.
If webpack federated modules are workign out for us, we might be able to resolve dependencies for addons too.

The iconresolver, uses a icon name in the url to lookup the icon resource url from the plone.registry. The icons are deployed and registered in staticresources and can be overriden via genic setup as usual. @santonelli currently works on a collective package which registeres fontawesome icons enstead of the default bootstrap icons.

But the icon resolver still needs some documentation.

Last, though it should be on every paragraph: million thanks for the work on keeping the > Plone Classic alive and working!

Not everyone wants/can move to volto.

Thx, i think so too however, we could use more support.
Right now we are a smal group of people doing most of the work, which slowes us down.

plonetheme.barceloneta is now based on Bootstrap 5.0.1 - Join us next Wednesday!