@tisto
Hi Tisto,
I've created a thread for Form Generator in Angular 2 as we have discussed earlier in the GSOC - progressive web app thread. Last couple of days I've worked with Plone installation and familiarized with basic activities with the CMS. However I couldn't install the addons that you mentioned during the discussion.

A through-the-web form generator for Plone


The error seems to be a compatibility issue and that has been discussed in the following thread.

I'm also getting the same error mentioned above. Can you please show me a way to overcome this.

I think this error is with PloneDev.Vagrant kit. I have installed plone/buildout.coredev in Cloud9 IDE and works fine with add-on installation.

You might want to look into form.io for inspiration:

Their code is Open Source and it works with Angular 2. So it might be worth checking that out. Please keep in mind that we currently do not have a backend implementation on plone.restapi for this. Therefore your proposal would also need at least a specification of how a possible backend could look like. I'm happy to help with the backend implementation. Though, we need a basic idea how this is going to work.

Thank you so much @tisto. I have worked some time with PloneFormGen and easyform addons and I continue the work with them while observing the functionalities, pros and cons on them. I think, I can build an Angular 2 web application with a restAPI to integrate with Plone as a newer Form generator addon. However need some guidance with the backend developments. Since this idea is not mentioned in the idea list, I have limited direction on that. If you can direct me to some references(plone.restapi) I can find a way to develop the backend as well.
How far do I have to describe the backend developments in the proposal.

need some guidance with the backend developments

I think that is something, should the front-end aspects of your proposal be well-thought-out, that mentor(s) and community would be eager (or at least responsive and willing) to help provide consistent direction on.

Much of my Plone work in the past 5 years has been on user-facing form-generation tools used for multi-organization data-collection, storage, and reporting. I am working on a (slightly stalled) project to move most of my form rendering to the client-side, and can offer some anticipated areas of concern/interest:

A few key things you would need to get comfortable with:

I guess the basic idea would be that the backend provides json-schema to auto-generate the form. The plone.restapi @types endpoint already provides json schema.

Though, the question remains what the form generation editor would send to the backend to create/update the form.

I might suggest that having layout and schema be distinct and loosely coupled is a good idea. Beyond that, I am not sure.

For example, when a form (suppose it has existing saved data) is to be loaded, you need to load the following state:

Slightly OT: I would be concerned that JSON Schema is not sufficiently rich enough to have parity with what we can describe in plone.supermodel XML (or some JSON equivalent of this). Having written or maintained two zope.schema knock-offs in JavaScript, I would want to make absolutely sure that JSON Schema was up to each task assigned for serialization/description.

You should also look at plomino with the new advanced_ide branch. Its built in angular 2 and is a full WYSIWYG form editor. The most advanced in plone.

JSON schema is definitely not enough, we either need to enhance the standard (as we already do in plone.restapi and angular2-schema-form) or create a separate "layout" structure/definition as react-jsonschema-form does:

In any case, if we do this as a GSoC project we would have to explore and evaluation the different options. Ideally, that would be included in the student proposal.

For what it's worth, there's also http://www.alpacajs.org

Thank you @seanupton for the elaborated explanation on the form generation tools. Most of the things mentioned up there are quite new to me. However it provides me a guidance to dig in deep. [quote="tisto, post:9, topic:3900"]
JSON schema is definitely not enough, we either need to enhance the standard (as we already do in plone.restapi and angular2-schema-form) or create a separate "layout" structure/definition as react-jsonschema-form does:
[/quote]

JSON schema is something I familiar with the Angular 2 developments as well. But if we want to extend the standard or separate the layout structure, it is needed some study on this. I believe in the planning and initiation phase of the project can be dedicated to understand evaluate the best option for the implementation.
Thank you @djay and @petri for the suggestions. I think plomino is a good place to get some idea as it is built with Angular 2.
Since we are so close to application deadlines I'm looking forward to know in what extent should I explain the technical details in my proposal. Though I was little late to join with the community, I believe the time prior to coding phase also can be allocated to understand Plone Rest API developments. @cewing @tkimnguyen @tisto Any advice on proposal preparation?

While understanding how the plone backend works, I have prepared a high level architecture with my Angular knowledge.

I propose a drag and drop components module which is something similar to collective.EasyForm add-on. Each components may have different type of validation criteria user will allow to customize the validation according to their preferences (eg: text field in to email validation, select option in to IsChecked validation etc.). Once it is done and hit the save button will create a JSON schema of the field set along with the validation criteria. This schema will send to DB through rest API. Rest API will pass the data into relavant end points.

Once the form generation is done the site has to render the form from the front end. So the rest API will call the relevant forms from the DB and based on the JSON schema, controllers will generate specific HTML components and pass them to view for rendering. So the form is created according to the user preference and validations are also set accordingly. When the real end users work with the form, a real time validation will be done. 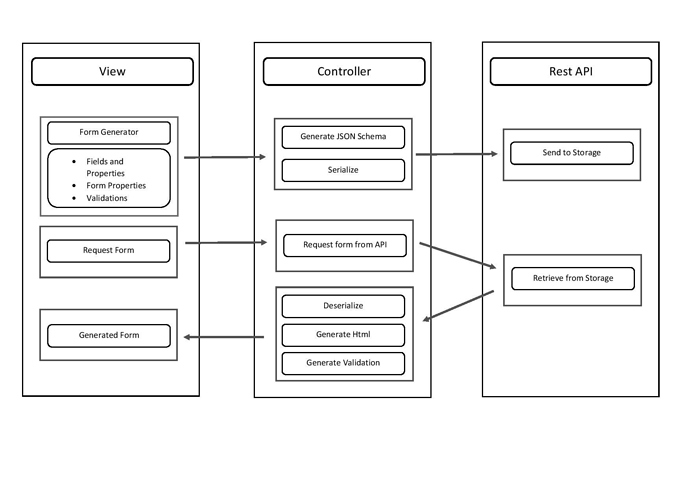 It seems to me that the scope of this project needs to be made fairly tight, to limit the many possibilities.

@nick_mib -- a few quick thoughts for you to ponder before the application deadline:

I don't really understand why this project is being suggested.

Plominio is the successor to PFG and it already has a DnD UI. 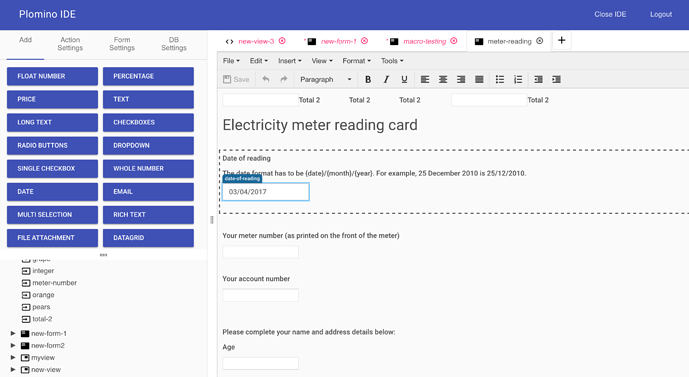 Why reinvent the wheel?

ploneconf2017 sprint (21st and 22nd october 2017) I am going to start working on this addon.
My plan will be start making an addon which has basic drag drop support to add different fields in a form. And when done it will save a json schema (similar schema that is useable by angular2-schema-fom). As phase 2 it should render the form using some rest service in angular app.