I trying Plone 5 and the new design is great.

I was hoping an improved method for controlling navigation might be included. Am I missing it?

What I mean is, if a user adds a page or folder, how can they define if / where the page or folder will show in navigation? I realize the site can be set to add all new content to the navigation; however, this doesn't seem useful.

in Plone 4 I did use a product that allowed the site admin to do this; however, a user can't. Also, not sure if these two products work on plone 5

Maybe I'm misunderstanding, but with Plone where you "are" when you create a content item (such as a page) defines where that item shows up in the navigation, which is just a reflection of the item hierarchy (or folder structure, if you will).

If you want to make an item also appear elsewhere in the navigation you can add Link objects or you can add an alias so that it becomes accessible via another arbitrary URL.

You can also set an item to be excluded from navigation but that doesn't seem to be what you're asking about.

What was the Plone 4 product you refer to?

Hi. Thanks for your thoughts.
I agree that location when creating a folder or page determines location. Also, depending on settings , the new content will either not be displayed in the navigation or automatically displayed in nav. I find both unsatisfying.
What I want to understand is if I as site admin turn off the auto add to nav, how can a user who creates a page or folder then have option to show in nav?
The plone 4 product i was referring to was quunta group plone tabs. This product settings is only available to site admin

Please have a look at my talk at the recent plone conference. I think this
and default pages are one of the most important ux issues to fix.

I'd be very interested to hear more about your use case and how you would
like it to work.
I agree links and aliases aren't intuitive solutions.

In Plone 5 when you add a new (say) page, the Settings tab shows you a "Exclude from navigation" checkbox, so if I understand correctly by default new content items always show in the nav and the content creator and editor can exclude an item individually. 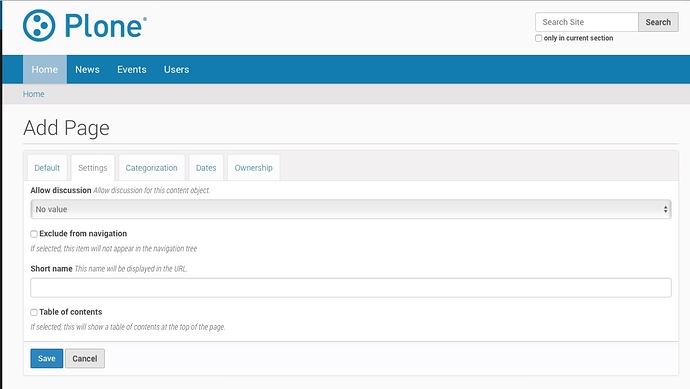 As a site admin you can control what normally shows up in the navigation via the Navigation control panel. 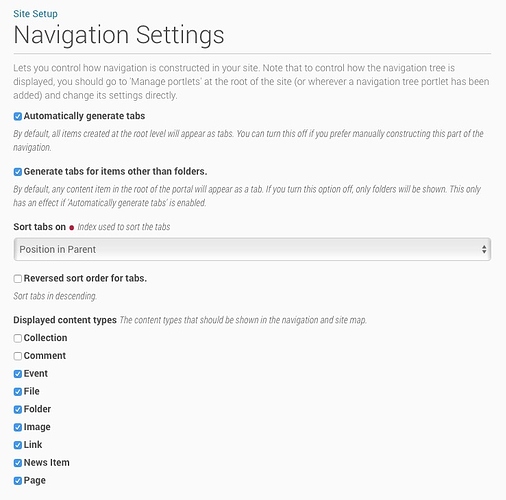 Are you asking for a "show this in the navigation" checkbox?

The built-in assumption in Plone, @rileydog is just the opposite of what you are looking for here. If I understand you correctly, your desire is for nothing to show in navigation by default, and then to grant users the ability to show something if they so desire. The way that Plone is built assumes the opposite. Everything (of the types you have selected in the navigation control panel) appears in navigation by default, and you can choose to remove or exclude it on a case-by-case basis.

I suppose that it would be possible to make an add-on (or perhaps even a content rule) that ensured all new items had exclude from navigation set, and then allow users to un-select that as desired. I am unaware, however, of any add-on that does this.

Thanks much for your wisdom.

However, I think there are two weaknesses with this approach:

Instead, when creating new content, in the creation dialog box, I would have a "Show in Navigation Yes No"
This would be required selection.

Also, I would get rid of the setting in the site setup where site admin can have content always added. This decision wouldn't save any work for the content creator if the above suggested ""Show in Navigation Yes No" was part of the content creation. I think if a person has the permission to create content, they should have ability to dtermine if it is in nav. Note that if the workflow for the content requires admin approval, this nav setting could be changed.

I look forward to your thoughts

Watched your talk. Got most of it, and agree that Plone takes some mental gymnastics to get the most of it.

Liked some of your points:

thanks for doing the talk and including the link

I think all of those are good ideas. Would have to look at what kind of
sites currenetly use the don't display items in nav functionality to see if
what the use case is. I think from memory there also a way to have only
certain types appear in the nav and not others. For example folders and not
files or pages. That would also have to be covered as that can be very
handy. It would be a pain to have to turn off nav for every file in the
site individually.
For point 4. If you have a look at my talk, there is a mockup of an idea to
let you edit the full path on the first screen of the edit dialog. That
let's you move it directly from there and without having to move around the
site. It also helps when content is restricted only to a certain place
anyway since it will default to that.

Hi Cris, This is Wayne Glover, we've met at Plone user groups.
I understand your point. UI is hard because we all have different mental models and work habits.

My concerns are summarized below. Am I missing something again?

OK, I am more confused now.

See the attached for my nav settings. Oops, don't see attachment. How do I paste as people did above.

In nav I checked the "automatically generate.." and "generate tabs for..." for the "Display content types..." I Unchecked the "image"

so, this says to me that the checked content types should be auto added (unless creator checks the "hide from nav").

However, when I add an image, it is still displayed. Why?

Hi @rileydog. Of course I remember you

You are missing one key piece that I think might have an impact on your understanding of the navigation control panel.

So when you say above that if the first box is unchecked everything below should be greyed out it really should only be the next three items. Everything else on that page is concerned with the local navigation portlet and is not affected by that first setting at all.

In response to 2) above, that's not really accurate, since local navigation is unaffected by the first setting. It is true to say that a user cannot then add tabs to the global navigation, but in general when site administrators uncheck that box it is because they want to keep tight control over what appears in the global navigation tabs. Many administrators prefer to have control over this in order to maintain a give look for the header of their pages (users should always see the same N tabs).

The reasoning behind the default of allowing content to show in local navigation portlets and asking users to hide those things they wish not to have displayed is based on the premise that having more complete listings of items in a given folder is better. This may not be a true assumption in all cases, but that's the choice that was made for Plone.

Does understanding that there are two distinct navigation systems here help with your understanding of how those controls work? Is there a UI enhancement you think we could make that would improve the newcomer's ability to understand that distinction immediately?

I think the mere fact it takes so much to explain it I think is good reason
for us to have a hard look at navigation for 5.1.

Cris,
first, thanks for your great response. It shows the years you spent managing plone sites at UW. I suggest the biggest weakness for an organization using (or thinking about using) Plone is true support for site admins (like me).

I understood about global and local nav. However, what I didn't know is that the navigation config page is divided between global and local: thanks for clarifying that. With this explanation, I have a better understanding of using the nav config page. However, the page is far from clear. I suggest that we could make a few simple text changes'to this page that would make it much easier. I have a word doc with suggestions. Focused on word changes only because it will clarify for site admins with minimal effort from plone team. Cris, I don't know how to post it here. I will email separately to you and see what you think.

Further, I did further testing and I am still confused by the second part of this nav config screen. As a test, I un-selected the 'events' from the "Displayed content types The content types that should be shown in the navigation and site map.". To me, this means the event content type won't show in the local (Portlet) navigation. However, when I added the stardard nav widget to the portlet, the events folder shows.

Thanks for the inputs from all the posters here. I hope to hear more and see if we can clarify this for me and others.

I don't disagree, @djay. I do believe that there are ways we can improve the UI/UX of the control panel to clarify the purpose and scope of each of the settings.

@rileydog: remember that the Events folder is not an event itself. It is a folder. Are you saying that when you are looking at the events folder then all the event objects inside it are displayed in a navigation portlet, despite that type being unselected in the control panel? That would be a bit surprising to me, and may be a bug.

Good points. attached see pictures that I believe show even with this new understanding, I don't understand if Plone is acting properly. Also, this setting, even if working properly, doesn't seem to make sense to me. If the "Events" or "News" folder was shown as a tab, why wouldn't I want events to display when viewing the tab? as for the portlet, this is controlled locally.
Anyway, I agree with our Aussie friend, if it is this complicated, improvements would be helpful (or just get smarter users 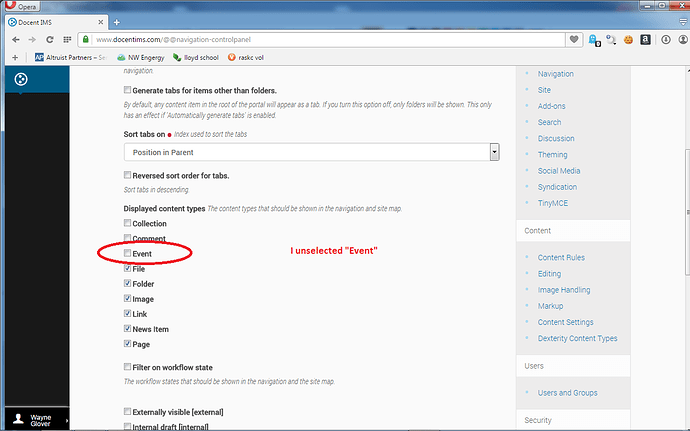 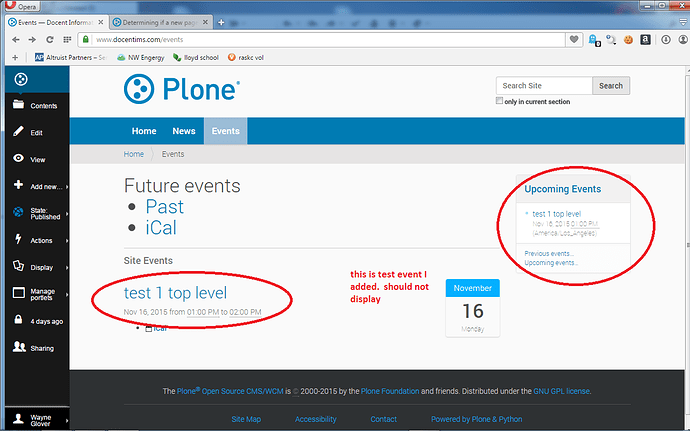 @rileydog: That portlet you have circled in the second screenshot is not a navigation portlet. It is the events portlet, the sole purpose of which is to display events published in the site. If you wish you remove this, you can click on the 'manage portlets' link in the toolbar and either remove, hide, or block it from showing.

It is in no way affected by the navigation settings. The default navigation portlet will appear in the left column, not in the right.