[image: Screen Shot 2015-11-16 at 9.09.36 PM.png]
I guess one reason for that setting is that sometimes certain "content
types" exist for purely functional reasons, and they just should never be
locatable by site visitors at all, be it in the global navigation, nav
portlets or sitemaps. For example, PloneFormGen registers all its
different form field types as content types, but they don't represent
user-viewable content at all. (I'm talking about PFG on Plone <= 4, I
haven't checked it on Plone 5 in detail). 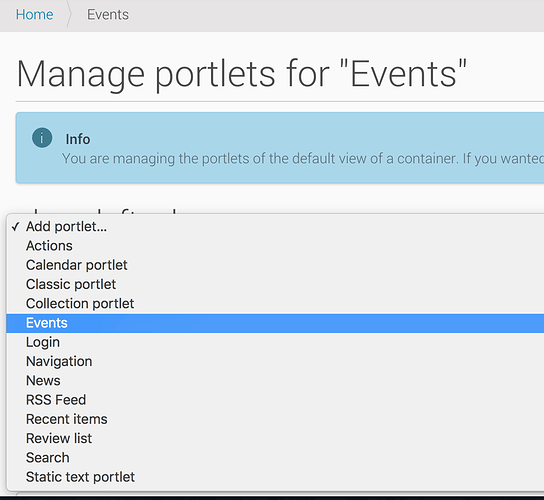 Thanks Fulvio, between you and Cris I get. I think this is too complicated (don't we always blame the software and not ourselves). I do think some simple text changes to the nav config would help to clarify this below is a markup of the nav settings with a rough draft of possible changes. Thanks to all for you help in getting me to understand this issue 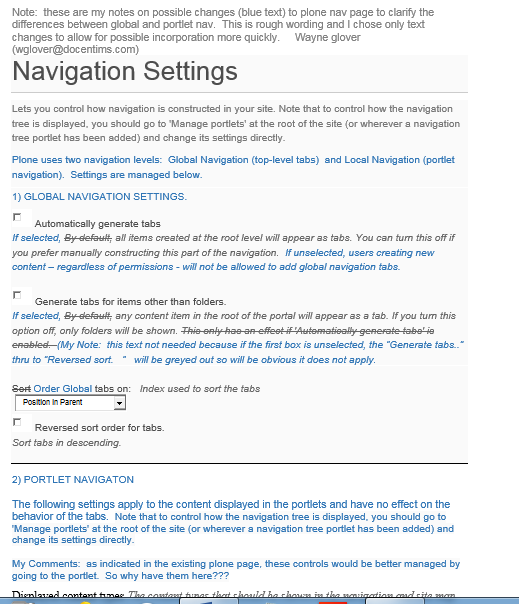 Perhaps I've missed something, but your suggested rewording of the "Automatically generate tabs" help text seems incorrect to me. If that box is unchecked, someone with appropriate permissions (e.g. Manager role) can create portal_actions that will show up.

Hi, thanks for your thoughts. I should clarify to say I mean it can't be done TTW.

If the "automatically generate.." in nav setup is unchecked. Then create content at the root. ensure it is published. the content does not appear as a tab. so, go to contents of root folder, open the content you created, go to "edit' and 'setting'. there is nothing there that allows you to force a tab to show for this content. you do have the option of Not showing content (this would apply if the auto create was checked in the nav setup.

I think as maybe Jens said above it would be good to expose that through a non-ZMI view, in the control panel or perhaps as you're implying on the edit view of a content item.

(Note: /manage_main is no longer accessible for a live site after the
20151006 security patch, unless you open an SSH tunnel)

based on what fulvio said, does this mean that if the site admin does not
tick the box to auto create tabs, then there is no way for a person
creating content to assign a tab to that content? Note: I went into ZMI,
and found the portal_tabs. I remember trying to add a tab from here once,
I screwed and destroyed the site. Ooops.
the other option is to have site admin tick the box and have tabs always
show up. The problem is if I go to the new content "edit/settings" and
"hide in nav" then it doesn't even appear in the portlet nav. Not a good
option.
I created a Plone 4 site and used the Quinta group plone tab product to
solve this issue.
Seems like a usability issue.
any chance some text changes like I posted (wording to be improved) would
be possible for next plone release?
This nav settings is the same as far back as I can remember. How have
others been solving it?
thanks all

A PLIP would be good for allowing the creation of portal_actions of various types using an existing or possibly a new control panel.

Not sure what would be involved in adding a checkbox to each content item's Settings "tab" (e.g. adjacent to the "exclude from navigation" checkbox).

(By the way, if you make a change to, say, a portal action that damages your site, you should try browsing to mysite.com/manage_UndoForm)

With the blocking of manage_main it sounds like there is critical need to extend the navigation control panel to support a manually managed one that allows management of portal_actions.

Well manage_main is not blocked by Plone but if you do additionally the suggestions done with the hotfix 20151006 (https://plone.org/products/plone/security/advisories/security-vulnerability-20151006-csrf)

Generally spoken, it would be a good suggestion to have a Plone Control Panel for all stuff that is done in the ZMI at the moment. No user nor Admin should have to go to the ZMI if possible.

Good discussion. As the person who started this, I would like to refocus on what I see as the key issue: the navigation process for Plone is, from a site admin point of view, totally unacceptable.

For plone 4 site I created, I used the Quinta group product that allowed me to create the tabs. as something as important and basic as this should be part of the functionality of Plone. How could you explain this to a potential client.

Plone 5 is a big step forward. It just missed this part. I would like this to improve. Is there some way for me to help?

Which add-on did you use, the dropdownmenu one?

Full list of Plone Products developed and maintained by Quintagroup.

Dear future Plone user, this is a message in a bottle from the distant past. The issue with managing portal_actions was fixed in Plone 5.1 with a new @@actions-controlpanel. This is the PLIP which implemented it: https://github.com/plone/Products.CMFPlone/issues/1342.