The Zope-4-Welcome-Sprint is a chance to move forward with Plone and other applications built on Zope.

gocept hosts this sprint in Halle (Saale), Germany from May, 16th to 18th.

You are heartily invited to welcome Zope 4 in the Python 3 wonderland and help his friends to also start to live there.

Will you join us?

I think Jan confirmed last week that he's coming to Halle for the Zope-4-Welcome-Sprint. If there's anything he should prepare in advance just let me know

That's nice. To effectively contribute to Zope resp. Plone a signed contributor agreement for each of the organisations is required. If he already have them, no worry about further preparation.

@icemac thanks for your quick reply. Do you know where he can get the contributor agreement?

The Zope Foundation contributor agreement is here: https://docs.zope.org/developer/becoming-a-committer.html
The one for Plone is there: https://plone.org/foundation/contributors-agreement

Here are some things every developer who wants to help porting Plone to Python 3 should do before the sprint:

At the beginning of the sprint we will split into teams that work on different tasks. There are a lot of things that need to be done and here are some issues that we'd love to work on during the sprint:

As a small motivation-token here is a screenshot of the Plonesite I just created in Python 3. Today I finally found the time to fix a issue that broke creating a new site. 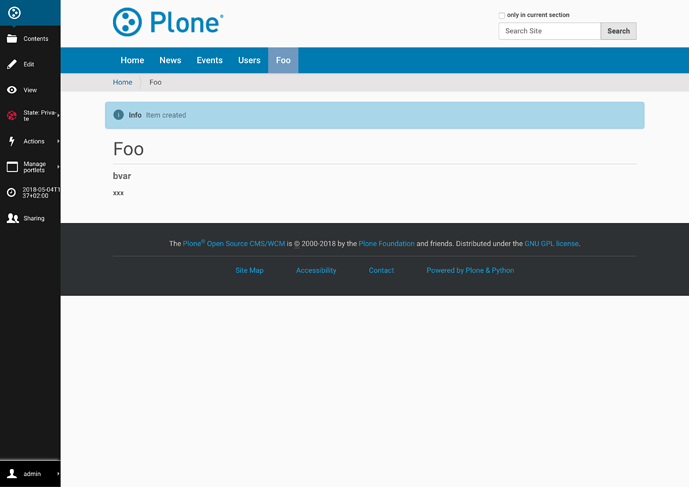 I am experimenting the tox way:

So I can have one coredev checkout, one shared src and I can run the tests for both Python versions, i.e.:

@alert, is the idea there to also map all the (sub)packages across a test matrix and parallelize via Travis and/or AppVeyor for buildout.coredev?

@Rotonen actually I have no plan

Whenever I have some time I try to pick a package and make the test run for both Pythons and the current tox configuration (even if it is not perfect) is something that makes this quite convenient.

One to solve before the sprint if possible, is this one:

Issue: KeyError on releasing resources of a Connection when closing the DB.

This is the problem causing our jenkins builds to hang some times.
See:

Issue: Plone 5.2: Problem with ZODB 5.4.0: Intermittent KeyError on releasing resources of a Connection when running tests.

It can also be reproduced outside of running tests. Sometimes when stopping Zope, it will end with a keyerror instead of closing down nicely. This can probably cause issues with proper reporting of shutdown (docker etc.)

pbauer have pinned ZODB to 5.3.0 to avoid jenkins hanging, until the issue in ZODB is solved. See

Issue: Plone 5.2: Problem with ZODB 5.4.0: Intermittent KeyError on releasing resources of a Connection when running tests.