Out of plone.api came a Plone styleguide that eventually was tried to be enforced by plone.recipe.codeanalysis.

From there plenty of flake8 plugins were born.

We even have our own profile for isort

black has rendered any formatting discussion moot (for good

With python, and Plone following, moving to python 3 and a year release cadence, new syntax is coming and old one is deprecated, so more tooling (pyupgrade and plenty others) have became sort of standards to ease upgrading the syntax.

Not all developers are native English speakers, and even so, we all make typos on our mother tongues

So yet more tooling to help out (codespell).

All these tools are great and if you do your duty of linting a package with all of them and on top of that add some extra functionality, you are already a hero

Unfortunately the next contributor might miss to use these tools, so we are back to square one

That's where the enforcing part comes into play.

For a while GitHub Actions are the new rage in CI, so let's use them for it

Configuring a single repository is not that hard, see this example PR on plone.batching, but things start getting complex when you try to lint a package that has to be still Plone 5.2 compatible, and thus maintain python 2.7 compatibility (i.e. no fancy f-strings for you

Again, others came up with a solution

If there is enough consensus (framework team?

should I write a PLIP?) I would volunteer to do a friendly fork of that repository to the plone (maybe collective as well) organization, and start configuring repositories with it.

As a wishlist one could start with the uncontroversial ones:

And add more tooling as we agree on, like:

At some point running the tests fo the package itself and get coverage reports would be nice, but that requires some extra effort (we can again follow the lead of the Zope organization and start using tox for it, to test on multiple python versions).

There are plenty more details that could be discussed, but this is already too long, and if there is no wish for having this it might not be needed anyway to mention them

What should be the next steps forward then?

It's time to unburden some of our technical debt. Thank you for leading the charge!

The Plone Documentation Team already does the following for documentation—which is not code—but you might want to consider or incorporate some of our practices. We focus on making things easy and approachable for first-time contributors.

Volto is similar to Documentation in that it has its own unique ecosystem, where quality checking tools differ from typical Python packages. The Volto team started discussion about what should be adopted and adapted to their needs. I won't go into the specific JavaScript tools used, but tools that may be useful for any project include:

I have not tried codespell, but it seems not to have as many features or customizability of Vale. We recently ditched sphinxcontrib-spelling because it was unable to recognize hyphenated words as spelled correctly. It would mark "add-on" as misspelled. Argh!

Finally, for any Python project, pyenv lets your run multiple Pythons on your system.

Volto is moving toward make in this issue: Move all ci scripts declared in package.json:scripts to a Makefile · Issue #3192 · plone/volto · GitHub.

Another tool to consider, pre-commit. I can't remember which Plone repo uses it, but it enforces an automatic run of linters on every commit, so garbage never makes it into PRs. It can also run a test suite, which also reduces the breaking of tests.

Yeah, Makefile makes sense, to keep the same UX for both CI and local development

I'm not a huge fan of pre-commit though, I see clearly its benefits, but I'm wary of having to code and maintain yet another set of version pins and configurations.

Maybe there is a solution for that, and if we end up using a meta-project to orchestrate our config files, that might not matter much any way

Thanks for the ideas

Thanks for bringing this up! Some thoughts:

I want to mention the Plone Code Quality tool is already an attempt to do that. It uses pyproject.toml configuration (example config)

This tool is already the default option when you start a new project with cookiecutter-plone-starter, where you can use make format and make lint

The tool also has a GHA implementation that you could see working on collective.casestudy

It already has checks:

And it also runs as a formatter for the codebase.

I would love to add more flake-8 checks, including the usage of plone.api,

@gforcada, any chance you want to sprint on that during Alpine CIty Sprint?

Yes, by all means. I'm signed up, but unfortunately until next week I can not guarantee that I will be there physically.

If that is not possible (to be there physically) at least I will try to be remote all days but Wednesday (as that's the reason not to be 100% sure if I will be there in person).

I did have a look at the Plone Code Quality tool, though not sure if it is more for add-ons rather than core repositories?

Like @mauritsvanrees I very much see us doing a fork/copy of zopefoundation/meta repo and maintain sanity between all core repos. For linting we could use the Plone Code Quality tool if it fits the needs

Thanks for the long list of points, all them really good. I'm also not a huge fan of makefiles either, but as I'm also not so versed with tox.ini (almost at all

) we can see which balance we can take from it.

As for z3c.dependencychecker, indeed, is a bit tricky, but the whole point of plone.base is to untangle dependencies, so IMHO, unless one starts to specify them correctly and gets warnings when adding more undeclared dependencies, we will never get out of it

I remember that there are some packages (maybe pip does that already these days) that prints the dependency graph of a given set of packages, we should add that as well, to see how the dependencies go

The original goal of Plone Code Quality was to be used for add-ons, but the idea was to be flexible enough to support both use cases.
One of the things I wanted to have but did not have time to implement was flake8-plone-api enabled by default. For Plone 6 development, we should improve flake8-plone-api and add warnings related to plone.base.
Of course, for core repositories we could disable flake8-plone-api checks.

I'm also not a huge fan of makefiles either, but as I'm also not so versed with tox.ini (almost at all

) we can see which balance we can take from it.

What do you use instead?

One major reason to use make is to have a common interface across all projects, for both Python and JavaScript. In theory, make tests could run tests on any project, even if it is a wrapper around tox or the test runner. I don't know if tox works with JavaScript-based projects, but I highly doubt it would.

tox makes it easy to test a Python project across all supported versions of Python because of its configuration. I suppose one could do the same with make, but the configuration would be less elegant.

Side note: I am a huge fan of Makefiles. And we are working on one way to divide the file into mungable sections with high transparency on what happens (mxmake, work in progress). I also do not like huge Makefiles (anyway, it does not scare me away). Make and its simple and excellent dependency resolution is widely adopted, very well settled, works across Languages/Systems and is well documented.

At work we are still relying on zc.buildout generating scripts on the bin folder

For a while, we started mixing that with virtual environments (installing things directly there bypassing zc.buildout I mean) and a few Makefile files as well (and of course the usual amount of scripts on packages.json for JS/frontend things.

But I'm starting to see the benefits of using tox for all formatting/linting/testing, specially as it gives a bit of a friendlier (once you know it) way to run commands both in CI as well as locally.

Moreover if we consider that Python is evolving on a year cadence and this means that at least once a year you have to start the dance of upgrading and deprecating python versions...

For the ones interested: zopefoundation/meta repository has been forked at plone organization: 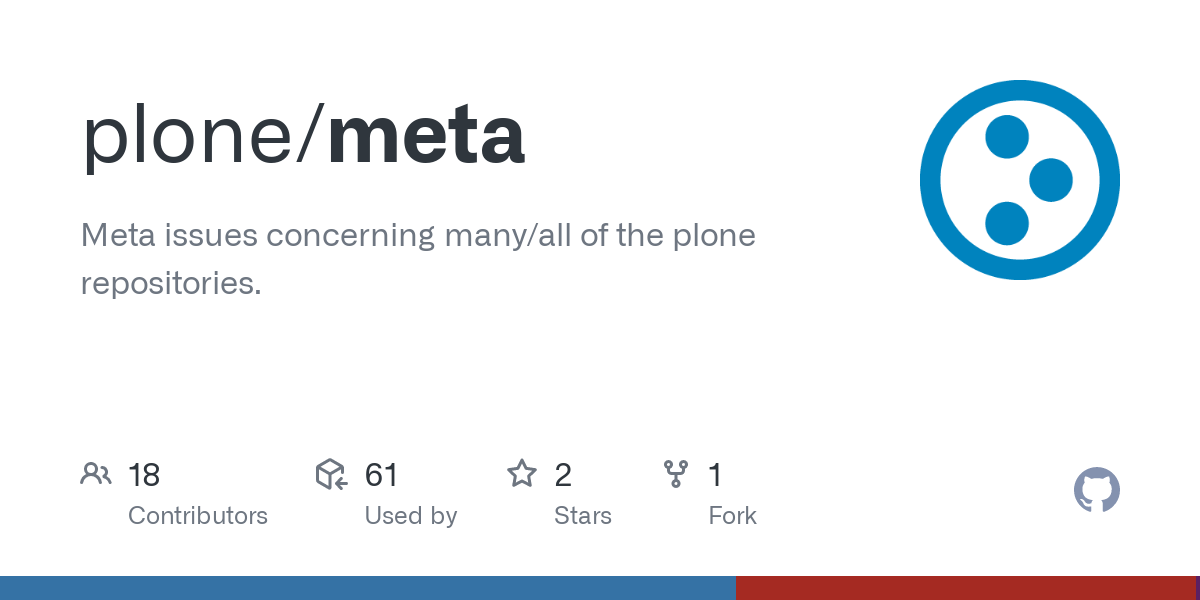 I forked @zopefoundation/meta repository and did the minimal changes to make it …viable to configure https://github.com/plone/plone.batching/pull/32 @mauritsvanrees at the end I ended up creating a minimal `Makefile` as to ease the way to run the tools from a developer point of view @ericof I did not use the GitHub action you built, we can have a look the next weeks to see how it fits with this other tool 🍀

A few test PRs have been created with that code:

@mauritsvanrees @jensens @ericof I would say this is ready for review and me…rge. The changes here come from https://github.com/plone/meta/pull/1 (which has been rebased and refactored 😄 )

Unify the repository configuration plus fixes #42 by adding the missing import s…tatement as well as changing bare `except:` for `except Exception:` which is not that great either, but a bit better 🤷🏾 🍀

Second package to be configure (after https://github.com/plone/plone.batching/pu…ll/33), this one seems to be almost fine, only one single fix from `pyupgrade` is reported 😄

Let me know what you think about it

This was announced today, and may be useful for this effort. 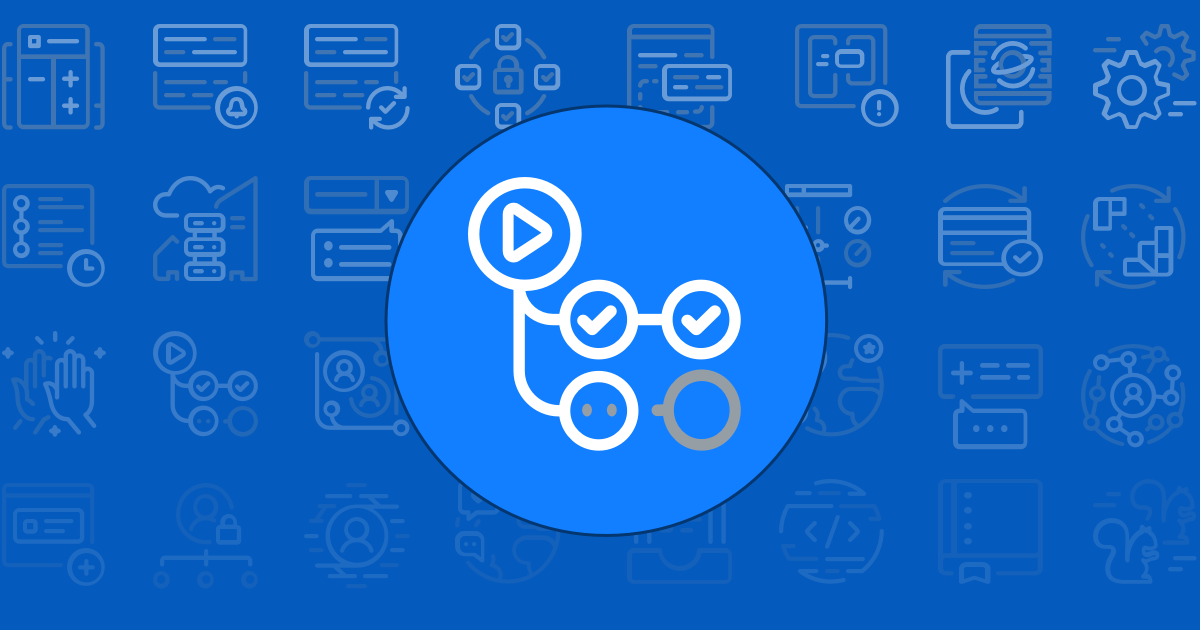 Now, you can standardize and enforce CI/CD best practices across all repositories in your organization to reduce duplication and secure your DevOps processes.

Indeed, it looks interesting, though maybe a bit too simple

I mean, we can not add black as a required workflow, as that wouldbe meaningless on documentation or volto repos, same thing around with js tooling or check links verifiers...

The meta repository on zopefoundation is mostly a configuration tool for tox.ini and other configuration files, rather than specifically for GitHub workflows.

The contributor agreement would not even fit the bill, as release managers are allowed to accept on a per PR basis

Variables on th other hand look awesome, be able to define python versions across all plone org sounds great

We need to explore it

I mean, we can not add black as a required workflow, as that wouldbe meaningless on documentation or volto repos, same thing around with js tooling or check links verifiers...

Maybe we could add required workflows, but make it possible to disable them for specific repositories in a configuration file. (i.e. the workflow would check the config file and immediately return a successful result if the check is disabled)

The contributor agreement would not even fit the bill, as release managers are allowed to accept on a per PR basis

This is not a problem, release managers are admins and can bypass the merge requirements when there is an exception.