I am working out on some ideas for new themes and have come up with are material design, minimalist design, full screen background video/image and overlay menu like themes. I would love to hear some ideas/features that you think you should be in themes and are not available in currently available themes.

I think all of them are good options but my suggestion would be to start with material design, I think it'd the most useful for more people. Besides it's simpler because it doesn't rely on the presence of a 3rd-party integration or some UI to choose the image or video from.

There are many theme ideas to be gleaned from themeforest.net even though a lot of the themes there start to look alike. The "HTML" themes (as opposed to Wordpress or Drupal etc. themes) are easy to make into Diazo themes.

Thanks. I will check out the themes in themeforest.

Thanks. I also love the Material design

I am working for new theme pack idea for GSOC and I think material theme will be the first one.

The theme I would love to have in Plone 5 is one with the very minimum possible Css and Javascript, in particular for anonymous visitors, but still responsive to portable devices.
That theme would be a good option for those people who need to build a fast website that will be visited over (very) slow networks.

I think it would be very useful to have some screenshots of inspirational themes.

I think in addition to those generic themes already mentioned it would be good to have some opinionated themes that come with plugins and sample content. For example a public blog. or a club/community website, or a restaurant site?

An opinionated theme could take the whole summer.

Yeah, that's my another idea of theme as I've mentioned in post. Minimal theme.

Inspiration for minimal design(Color palette could change in actual theme):

Is use of external js libraries recommended in the mockups...like I used some of Google APIs js libraries in my theme...hope that wouldn't slow down loading time on slow networks.

I see a few things emerging from this thread.

There are two kinds of themes: opinionated and standard

A student can probably only complete one opinionated theme over the summer, there is the remote possibility that they could get two standard themes done and three would be exceptional, I would rather see one well done standard or opinionated theme than 3 half baked ones.

This makes the idea of a "theme pack" a bit of a moon shot for a single student, @tkimnguyen would love to get feedback on this. 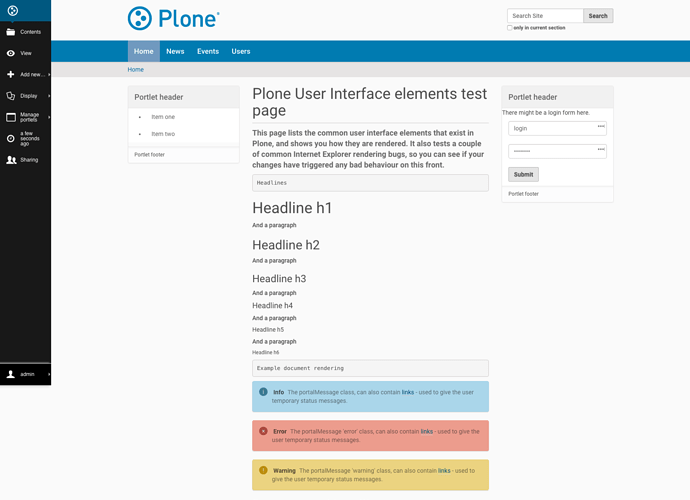 Other important standards need to be defined

Ideally the theme prototype css, html and js, should be completed within the first two weeks (this is a GSOC specific note )

This is just a recommendation, this would allow time for working out the kinks of the Plone machinery.

Another recommendation. I would have a strong preference for those that demonstrate a good eye for design, even better if they have a few web projects to showcase.

Thanks for the clarification. I am working on a theme and here's the mock up so far, Please provide your feedback. It's still wip but I think a general idea would be good

I'm planning to create a every bootstrap element according to theme design so it can be used as standard theme. I would also create a mock up for "test-rendering" view.

@vicodin please bear in mind that these are my opinions at the moment, they may shape the direction of the theme related work for GSOC but I'm hoping to get feedback from others in the community.

Just looked at your theme mockup and I like the general direction but I'm not happy with the interplay of the colours at this point. Is there a reason that you're not mocking up the theme in real JS/HTML/CSS?

One challenge with this way of prototyping is that it doesn't account for the responsive aspect.

So should I include every single component in mock up?

I did not look in depth at the details of your mock, but I like the direction and overall I like the idea of a material design based theme for Plone.

@pigeonflight I'm mocking up in real HTML/CSS/JS. I'll try some other colors and share the link of mockup.

@jensens Thanks for the feedback, It's still wip so I think it would get better with few change in colors flow

In reality it will be a combination of both.