) on our website, but I can't remember how to reproduce it on a fresh new installation.

I searched around and only came to half explanations

so at the end I did as much as I could and wrote it down on this repo: 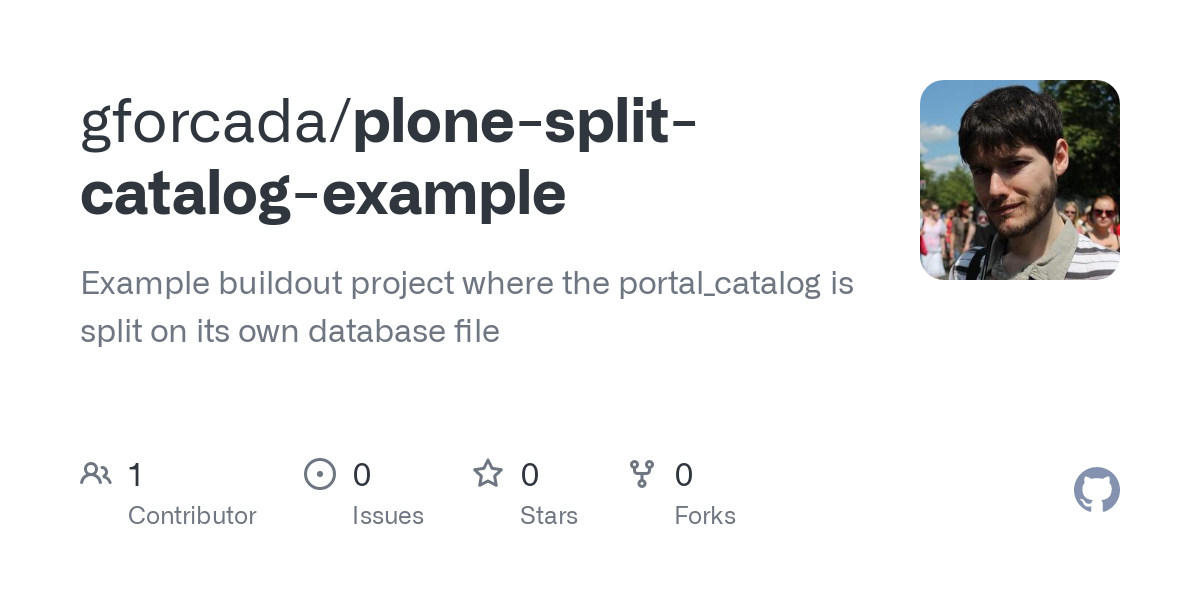 There is a buildout.cfg that goes with it, so one can follow the steps and see if they end up with the same problem: the split Catalog.fs does not work/is being ignored

Any ideas on what I'm doing wrong? any pointers to any documentation that I missed?

I know that it probably is not a good performance strategy nowadays, as using Solr or elasticsearch is far better, but as I'm having the problem right now, and I do need to get this fixed I'm reaching you all

Could it be as simple as this?

There seems to be a little trick which seems not to be documented very well. Zope actually doesn't mount the "root" of object tree, which would be a behaviour similiar to Unix mount. What it does is mounting an object within that tree, which has the same name as the mount point. So if, for example, we want to access a folder called "mysites" located at the root of a ZODB we're trying to mount, we have to call the mount point "mysites" as well.

Also, in case we want to mount a Plone Site (or some other object different from Folder), there's a container-class parameter in <zodb_db> section.

We have a customer that is used to create their Plone sites on the same Zope using multiple mounting points and I want to understand what are the advantages/disadvantages of this approach. Unfortunately there's not much information about this topic on the internet and an article that is cited many times seems to be lost: http://plone.org/documentation/how-to/multiple-plone-sites-per-zope-instance-using-separate-data-fs-files-for-each-one Is somebody here using that approach? Is this considere…

Thanks, I did not came across this links, as they focus mostly on getting a complete Plone site on a different mount point, rather than using an existing portal_catalog from another mount point.

The not well documented trick, indeed we have something similar on our production server:

Check that the Plone site and the catalog are using the same db connection:

Now the Plone site and the catalog are using a different db connection.

p.s. I don't know which is the reason, but after starting the instance I don't see the portal_catalog in the ZMI.

To solve it just open this url http://localhost:8080/manage_addProduct/ZODBMountPoint/addMountsForm and create again the zodbmountpoint via ZMI.

This is not a "good" solution, but IMHO it works.

Thanks for the reply, indeed I can see that they no longer use the same connection, but somehow something must be off:

If you look at the filesize of Data.fs and Catalog.fs one grows and the other stays the same: a plain plone site is around 6Mb, and after adding lots of content I make Data.fs grow up to 40Mb. No matter how much reindexing I add, or clear and rebuild buttons I click, Catalog.fs remains always at 6Mb

Search does work, so, somehow although the portal_catalog is mounted and using a different connection, data is still being stored on the main Data.fs?

First
The reasoning using the portal_catalog on own mount point is about optimized caches only. There are no other advantages. Conflicts still happen. Backup/Restore get much more complex. Is it worth the effort?
With RelStorage and it's caching optimizations this vanishes mostly.

Second
Why would one have 2 Plone sites in one ZODB? It used to be a thing 15+ years back. It adds more problems than it solves.
Firing up an dedicated instance make much more sense The memory overhead of a new instance is just 10-16 MB. -> Caches are optimized per-instance.

Third
Cross-database references are tricky and so we had several bugs (in past, all solved AFAIK). I know some companies who had to fight those with some 1000€ consulting costs added b/c of those. I hope this is all past and there is nothing left in ZODB from Zope 5.

Thanks @jensens for your answer, but you missed the whole point, sorry

My problem is that we already have this setup in production, but I can not re-create it from scratch.

Somehow +10 years ago we managed to create such a setup (a plone instance with a split portal_catalog) and it works as expected: data is stored on the Catalog.fs and portal_catalog ZMI works as well, but I can not reproduce it anymore.

The underline problem is trying to fix zodbverify errors. Data.fs is all fine, but no matter what I try on Catalog.fs errors are still there

Clearing the catalog and packing was not helping either.

So my next idea is trying to re-create it from scratch, so I can attach a brand new, database to our production to get past these zodbverify errors.

We could move to another solution all together? yes, sure, but as you mention on your first point, our setup is complex enough, that I want to keep it the same good old configuration that we have until we decide to make the extra effort to do something else (Relstorage?).

I found the original documentation we used 10 years ago

I will see now if this document still holds true on Plone 5.2.8

Unfortunately it still does not work

Instead I'm using a different, approach, silence the errors (by adding aliases) and see if that gets me where I want

So mystery is still around

While I got the database from py2 to py3, re-creating the Catalog.fs freshly new seems to still not work

Anyway at least I can move to python 3 without having to find a solution for the Catalog.fs at the same time.

A clear and rebuild of the catalog is mandatory as well, otherwise all searches return nothing

Firing up an dedicated instance make much more sense The memory overhead of a new instance is just 10-16 MB. -> Caches are optimized per-instance.

You sure on that? I think you are forgetting the size the loaded code which would be way more than that.