Printing page without showing URLs for each link on the page

I noticed that when I print a page with links, the actual URL also shows up in parentheses next to the links. Is there a way for me to turn this off so that the URLs for links will not show up on the page? I just want to print the text only. Any help would be most appreciate. Thank you.

Sounds like a print style sheet. Usually this is done with :after selectors.

Thanks so much Thomas. I found the css statement in question in print.plone.less. Cheers.

I added this: #portal-globalnav-wrapper {
display: None;

to the print.plone.less . However nothing changed. I'm a CSS hack so this was my best and only guess

Also, tips on how to get the names of the sections in Plone 5 so I can add addition sections I don't want printed.

any help would be appreciated.

When you say, left-hand main nav bar are you referring to the tool nav bar (contents, edit, view, etc.) that shows up when you are logged in? If so, the class is .plone-toolbar-container and not portal-globalnav-wrapper. Is this what you are trying to hide when you print?

Hi, thanks for the idea.

I tried modifying the print.plone.less file as follows:

Attached is a screenshot of the print preview, so I'm obviously not doing it right. Any tips? 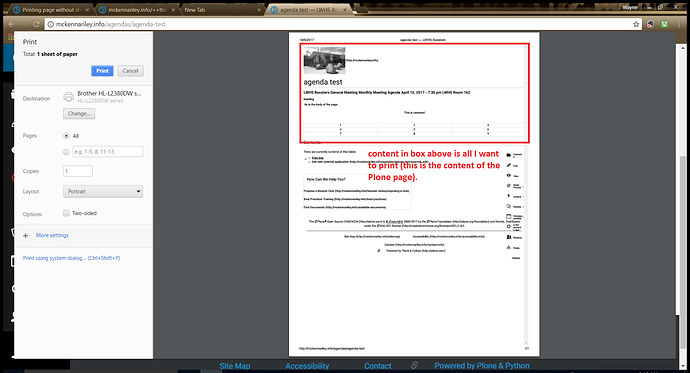 I placed this in my .css file:
@media print {
.plone-toolbar-container {
display: none;
}
}

I just tested it and it works. Let me know how it goes. Cheers.

thanks, I tried that but I probably put the code in the wrong css (I am definitely not a themer)

It seems to me that putting it into the print.less makes more sense. do you think so?

I would like to create a version of the print.less that is modified to only show what I have in the above screen shot.

If anyone would like to create this for me for a reasonable fixed fee, please contact me privately.

Then I'd make the less file public.

Did you run Grunt to compile your .less file after making changes to it?
$ sudo grunt
$ sudo grunt compile

I hope this helps. Cheers.

You may not need sudo as per the reference link. It depends on how your grunt was installed.

OK, I have a local programmer and I'll talk with him. Or, I'll take your advise and try css.

thanks for the pointers.

You are most welcome!

want to let anyone reading this know this issue is fixed in plone 5.1RC1.

There is a new configuration is Site setup called Portal Actions. you can activate 'Print" from there and it prints only the content well (However, it does print the "Print this" link at the very bottom of the page. ) Works great

That print portal action has been in Plone for eons...

but that's for making it visible in a product. Is there a simple way to turn this on TTW?