Attendees (may have missed some - apologies)

Minutes by Kim Nguyen, with notes from Sally 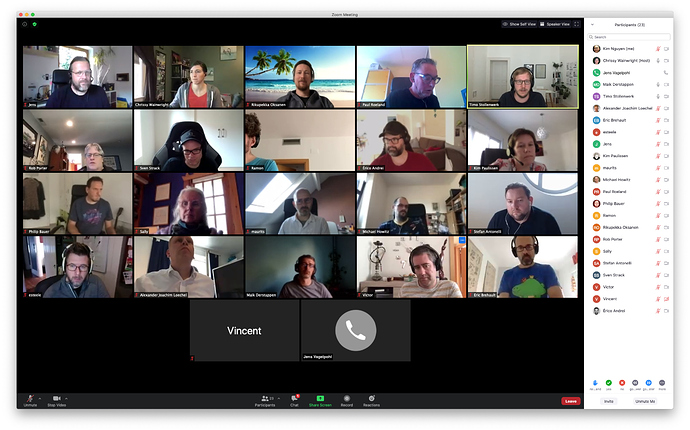 Timo: discussion is great but opinions can be louder than others, but in the end it’s whoever has the energy and takes action. That’s what we rely on to make progress. The decision making process based on who is loudest doesn’t help things happen. It’s a do-ocracy.

but UX contributors don't write code so a do-ocracy favours developer friendly features where Plone is fundamentally a non-developer tool.

No one said or implied that UX contributors were expected to write code. From what I've seen, there has been occasional discussion here (and maybe in sprints) about UX but rarely has a decision come out of the discussion. Slinging ideas out there or arguing without trying to reach a decision is not the same thing. A UX team needs to try to generate ideas, foster discussion, and reach decisions. Coding isn't necessary. And coding isn't necessary for so many of these teams... their work is not about coding.

Albert never contributed any code. He just makes rock-solid and awesome UX proposals, so we find developers (me included) who are more than willing to implement his work and thoughts.

The same is true for any other development. Plone REST API would be nothing without me finding people who are willing to implement stuff that I envisioned at some point. Volto wouldn't be what it is today without Rob's boldness and vision that others took over at some point.

This is the essence of open-source IMHO. In the end we have to win people with ideas and visions. No matter if we are talking about code, UX, marketing or any other contributions.

Do-ocracy means that people have to actually invest something (time, code, whatever) and that we make decisions based on the actual investment instead of who-is-loudest in discussions.

Don't misunderstand me. I'm not arguing for the loudest wins.

The problem here not people trying to be loudest. It's that the no one here personally has the problems of an end user so it all seems like personal opinions that no one has a way to verify. On top of this everyone here is an expert on how to use Plone so any change is painful so why change it? We understand how it works so there is no problem that needs fixing. So for every UX proposal you get a lot of people voting for no change. So it's easiest to dismiss it since there isn't a consensus.

I am just pointing out that it is extremely hard to make UX important in open source. Not for want of trying. That is because open source is inherently a scratch your own itch, do-acracy. So a developer with an itch can propose a feature and back it up with code and that works. The framework team is full of people who are developers and they get and understand developer problems so any developer itch is going to be recognised and encouraged. But to prove there is a problem with UX that is worth the the pain of change is hard and much harder when the people judging it don't experience it.

A well funded company who can employ a UX person like albert works as a way to UX change in when its paired with the money to get the code written. But even that is not easy to do via the PLIP process. It's much easier to create an alternative brand and technology like volto than deal with the getting agreement on a UX change via the PLIP process. Volto is proof the PLIP process doesn't work for UX changes and for individual contributors trying to make UX changes.
REST API is an excellent example of a developer centric change that open source is good at.

Another perfect example is the migration issue Kim raised recently. Thats an end user problem. The conclusion of the discussion? There isn't a problem or not one we have. There's lots of options to do importing and migration and if you really don't know what you are doing then hire someone who does. I'm as guilty of this as anyone. plone.importexport is a good idea for end users and I couldn't justify the company resources to finish it because it didn't help make us money or solve our integration issues since we know how to use transmogrifier.

I'm not saying that I have a solution here. I love plones democratic ideals. But I reject the idea that a do-acrcy solves all problems. End users have no voice in Plone. First time integrators have little to no voice in Plone.

The conclusion I came to years ago was that the only way improve UX in product like Plone would be to have a BDFL who is a UX person who had the mandate and was respected and that is backed up by a company single company who could write the code. Thats the only way they could push through painful for needed changes. We used to have that. Now we don't. Even Drupal with its BDFL and huge resources in Aquia seems to suffer the some of same issues being too developer led and focusing on coder problems as this 2014 article talks about https://mikeschinkel.com/2014/the-decline-of-drupal-or-how-to-fix-drupal-8/

When I started the migration discussion, I hoped to draw out information and start lively debate, and although there was no decision made in that particular forum thread, I think it has already led to better understanding of the situation and it will have helped get us to an eventual decision more quickly or it will have maybe spurred someone into thinking about how to improve the situation.