There are different ways to make it easier/more convenient for people to use documentation.
We already created for example a plugin for sublime.
We could create plugins for:

Do we want that? Do we think that could be useful ?

as our human resources are limited (at least for the "core doc" team), I would have a strong preference for tools that work on all platforms. But if someone wants to do it on a rainy weekend, why not?

I have prepared a dash/zeal port of our documentation here. Please take a look and if it's good, we can open a pull request.

There's also DevHelp which looks nice. Also the python doc is available for that tool. The python doc for devhelp has been generated via sphinx (which has a native option for devhelp output). Should be quite easy to generate this doc for devhelp, but it will have to be distributed through the debian/ubuntu repositories. I don't know if this is good for us. IMHO I would say yes.

Is there a way in/with dash/zeal to handle updates and versions ?

Is there a way in/with dash/zeal to handle updates and versions ?

yes, you can add a new subfolder here and modify the manifest here accordingly

This is exciting. Can't wait to see it in Dash!

@giacomos if you are willing to maintain it, I say we should open a pull request !

@giacomos do you have an update on this ? 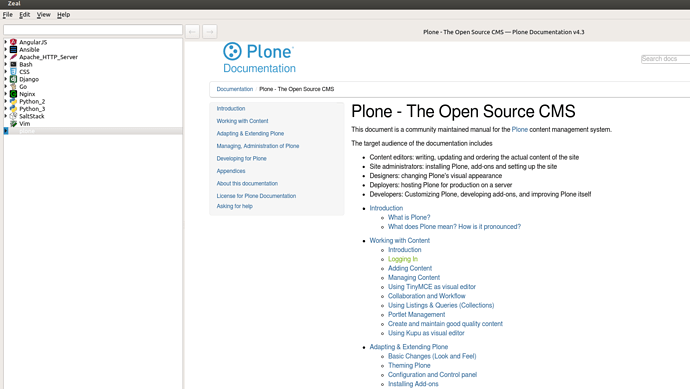 Plone Documentation is now in Dash:

Will this show up in a regular Dash update?

You can install it via the 'user contributions' button.

Please be aware this is the first version, which was tested with zeal, the open source version,
It works fine with zeal, but we are facing some small issues with dash.

Dash is currently not showing the index site, and will only show plone.api stuff in the left dash window, you are still able to get the full docs, if you open a api explanation on the left and then in this explanation in the right window you are able to click on the index button and see the whole docs.

Zeal and dash are supposed to show the same content, but looks like something changed with the recent updates of them.

We are working on a fix but it is not sure yet, how long this will take.

We are really sorry that we were too fast with announcing that it is working fine in both, without testing it properly on OSX too.

No problems! I'm excited that it's being worked on at all. This will be very handy.

I think I fixed it, I will test a bit further before I make a new PR, here is how it looks like now, after I added the docset: 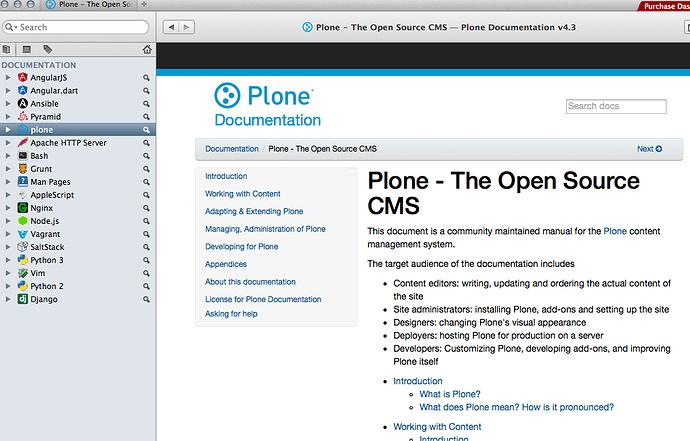 As you can see it gives you now the index page. I guess that is what we want right ?

We just did a bugfix release, which solves the outstanding issues