How do I make TinyMCE available to anonymous users?

I have add_resource_on_request(request, 'tinymce') set on my view, and have tried loading a shim as outlined here: http://docs.plone.org/adapt-and-extend/theming/resourceregistry.html#shim-resource-examples, but the visual editor will not load for anonymous users.

I see that the mimeType selector just beneath the <textarea> has pattern: plaintexteditor for anonymous users, while authenticated users have tinymce as the pattern.

How do I set this up for anonymous users?

you'll need to use the pattern assuming you're using z3c.form or something that adds pat-tinymce to to element: add_resource_on_request(request, 'mockup-patterns-tinymce').

tinymce is only the tinymce module--it won't bootstrap anything. mockup-patterns-tinymce will load the pattern so nodes with the class pat-tinymce will get initialized.

mockup-patterns-tinymce doesn't work for me either. It also throws a JS error on the authenticated view, but I can write a condition for that.

Might also be helpful for you to know this is on the add view of a dexterity type. I have an adapter that uses DefaultAddView for adding the resource.

Ah right, you need to use the require statement.

should work or you can add your own js file that does the same thing.

This could even be at the bottom of your theme file--it won't load the same resource twice(for logged in).

However, since this is an anonymous user, you might want control over how tinymce is initialized for them so you could go back to just including the tinymce files and do something like this.

This way, the plone tinymce settings won't be used.

I've been trying various combinations of requires and add_resource_on_request, but still have not been able to get the editor to load. The main errors I've been running in to are:

Another JS error I tend to see is if I try to use add_resource_on_request(request, 'mockup-patterns-tinymce'), then default.js throws Mismatched anonymous define() module

So I don't know if there are any resources I should be loading that I'm missing. This is on Plone 5.0.5.

Yes, like I said, you can't use add_resource_on_request on module definitions. http://stackoverflow.com/questions/9507606/when-should-i-use-require-and-when-to-use-define helps explain this.

There was a small bug in the example I gave you because I didn't try it myself; however, that is fixed now and I just tested it with a fresh site and it works. 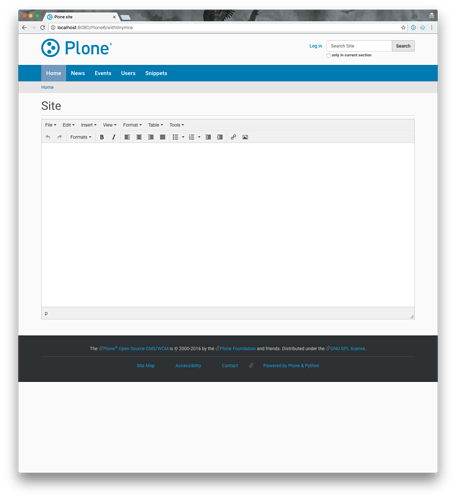 Where/how are you including this?

I have a JS file added to the Resource Registry, and I can see it is loading on the page for anonymous users.

With just this code, nothing happens. If I uncomment the require(['mockup-patterns-tinymce']); line, then I get the errors on the XML files.

I did just clear out my data, and am working on a fresh install of Plone.

Okay, I updated your branch with some integration code that should get you going--it renders tinymce for anon users: https://github.com/collective/Products.Poi/commit/578d648cad92bb4d1199bb234f376886cb2aa58b

Here were some of the problems:

I saw the commit come across, thank you so much!

I'll review the pattern being used and see what we can do better.

OK, I'm looking over the rich text widget. All the docs I've found use plone.app.textfield.RichText, which is what is using the textareamimetypeselector. pattern. I switched the fields to use plone.app.z3cform.wysiwyg.WysiwygFieldWidget, which works with the JS you had originally suggested, but there is a deprecation warning that it will be removed in Plone 5.1.

What widget do you recommend using?