Discussion about Plone and Zope4

Today at 15:45 we'll have have a Open Space about Plone and Zope4 at PyConDe16 in Munich. Since many of the people who were at the resurrection sprint are here it will be a good opportunity to discuss motivations, technical options and syncronize roadmaps. We'll hopefull have a writeup about the meeting and post it here later.

Now we are helping Zope in the Python 3 wonderland: Almost 20 people started with the reanimation of Zope. We are working mostly on porting important dependencies of Zope to Python 3: RestrictedPyt…

After reanimation we started defibrillation of Zope and … it kinda worked: On our sprint we got the following things done to help Zope in the Python 3 wonderland: Release zope.testbrowser 5.0 which…

Just a small sneak preview of the results of our discussion. Details will follow after we survived the party of pycon.de. 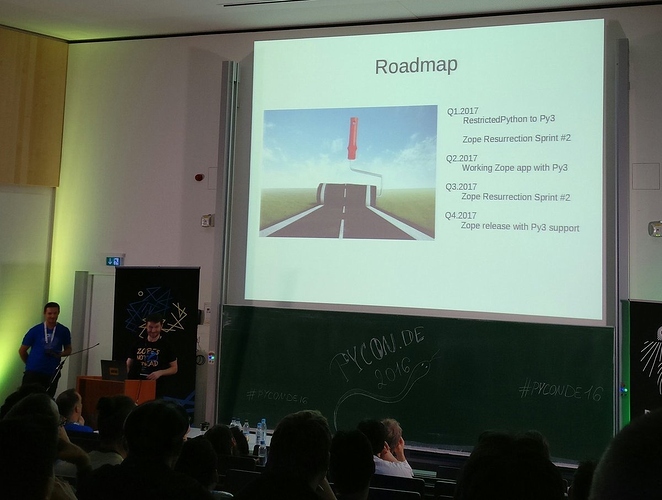 Nice roadmap! And glad to see there are more Zope resurrection sprint planned.

We've had some roadmap discussions at the recent Zope Resurrection
Sprint and at the current PyCon Germany conference. I'll try to
summarize the consensus we've reached among those in attendance at the
events, trying to see what others think of the plan.

The current main motivation for any new Zope release seems to be Python
3 compatibility. There's little interest in any new features in the Zope
Toolkit or other dependencies outside of Python 3 support.

Based on this and given the progress already made, it seems that the
main feature of the next Zope 4 release should be Python 3
compatibility. Releasing a major new Zope version before this goal is
reached seems to make no sense, as there are few if any consumers of the
framework who would use it.

I think it is achievable to release a final Zope 4 version with Python 3
support in mid to late 2017, but as with any volunteer based project it
will take as long as it needs to. In order to speed up the process,
there are various sprints being planned.

Looking at the work that happened on Zope master thus far
https://zope.readthedocs.io/en/latest/WHATSNEW.html, there also seems
to be support for the changes made, with the exception of the "ZMI
simplification" part. I'll work on reverting the changes I did to reduce
the ZMI functionality over the next weeks, to get parity again with Zope
2.13.

In order to keep the scope of the next release manageable, I'd also like
to avoid adding any other major breaking changes to it. For example
there's long been talk about replacing DateTime with Python's built-in
datetime, adding parent pointers to avoid implicit Acquisition or
others. All of those are on the table for a Zope 5 release in the
future, but I don't think they should go into Zope 4. At this point Zope
5 has no clearly defined feature set or a target release date.

This is an overview of the general plan, if there's interest I can
provide more details about the features already implemented and the
current status of the porting effort, if you haven't followed the
changes on Github.