How to customisation the footer section in the Plone 5.0?

This is a good question! According to https://docs.plone.org/working-with-content/portlet-management/managing-portlets.html#managing-portlets you can do some of the footer customizations: you can delete or move or hide the portlets that appear in the footer, but to edit the footer portlet itself you have to:

This is kinda hairy... we should

Issue: improve editing of the footer

You can easy deactivate them and do something else. Static portlets are one option and if you need something dynamic then you could use theme fragments: https://pypi.python.org/pypi/collective.themefragments and use them with Diazo or with Mosaic.

@tkimnguyen @PraveenKodi I think the documentation is out of date. You can modify it by removing or hiding and then replace the three different footer portlets installed by default with a static text portlet of your choosing 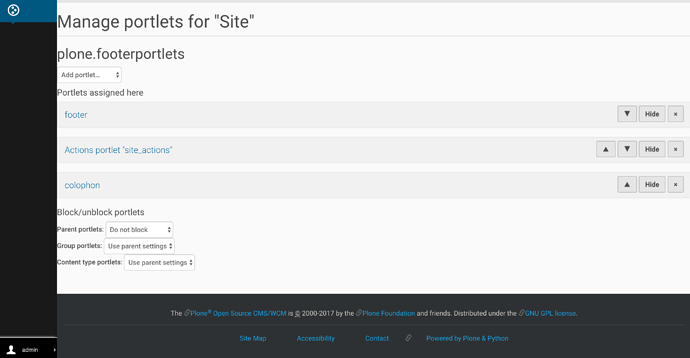 That is a great idea. Why are we still shipping with those classic (unmodifiable) portlets?

Possibly site actions can be static links. esp now ZMI is disabled.
colophon is dynamic, changing the year but do we care? It might also be translated, I'm not sure.
But just better documentation pointing to how to use portlets to customise would help.

A fat footer like we did here is just a single static text portlet and some diazo to copy the webcoutier dropdown menu from the top. https://www.crimecommission.nsw.gov.au. The randomised hero element in the header is also a single static footer text portlet with a table of images and some diazo to move it to the top and make it pretty. Adding a new image is as simple as adding a table row. The slider in the middle is done the same way but using a rich text mosaic tile. Even the quicklink icons are a simple diazo/tinymce style replacement trick, <span class=dofontawesome>myiconname</span>
Simple solutions that don't require complex understanding of plone. But most of our documentation is centered on complex understandings of plone.

Plone 5.1 has a new control panel to configure Actions.

I am also looking out for the same solution to Implement in my portal. But How to customize in Plone 4.2. I am not good in developing. I am using the tool to customise according to my project needs. I am happy with the https://www.crimecommission.nsw.gov.au link shared by you. But is there any document to customize in Plone theme?

try docs.plone.org (make sure to select Plone version 4, not the current version 5) and training.plone.org (but here the training materials will generally be for Plone 5's Diazo theming)

@PraveenKodi the only tool you really need is diazo. The learning curve is reasonable for someone who can do css and html but it is too much for someone completely non-technical.
However with plone 4.2 you don't have a footer portlet by default so you will need to get a addon for this. I generally use ContentWellPortlets for this in 4.x but I believe there is a footer only portlet manager addon too.

@PraveenKodi I should also mention that the links @tkimnguyen sent above are intimidating and include a lot of documentation about coding. Probably best just to look at https://docs.plone.org/4/en/external/plone.app.theming/docs/ and how to install and deploy an addon.

Very glad to see the idea of replacing top- and footer-viewlets with portlets is getting into core, it was always a little bit awkward to explain to clients why a little template-change would need a server-restart.

I have published a proof-of-concept for this in 2012[1] and it was possible by using your add-on "Products.ContentWellPortlets", kudos for that one.

If viewlets get replaced by portlets, it could be worth a thought to change the wording od the default footer-text, because it's misleading for many users who think plone.org is in charge of the current portal they're viewing.

I often witnessed devs ridiculing about the "stupid" users who don't get that. I wish user-requests would be taken more seriously and taken into account, even if there's no immediate solution. That'll require an enviroment where peeps can feels safe to speak out without being bashed.

I understand it's not easy to have the moderator-role, but building a forum in Plone would allow us to implement features where one can mute certain users if wanted, or block replies of trolls, f.e., without being dependent on a 3rd-party PHP-based solution.

If viewlets get replaced by portlets, it could be worth a thought to change the wording od the default footer-text, because it's misleading for many users who think plone.org is in charge of the current portal they're viewing.

just to be clear: viewlets are not going to be replaced by portlets, and portlets are going to be deprecated probably in Plone 6 according to the latest roadmap.

we need to find out a sane way to manage the site footer by that time.

Are there any docs about the motivations and reasonables for replacing portlets, somewhere?

The original discussion is from Deco's times:

I think we need to keep portlets as a feature, but not in their current implementation.

Viewlets are a different beast: they are fast and easy to create; I don't think they must be replaced by tiles as they solve different issues and they can coexist.

There is more on the roadmap, but I don't remember where I read about Plone 6:

We discussed the roadmap in Sorrento:

A belated report from PLOG - thank you to @chrimba @jensens @fredvd (blame for the delay is all mine!)

and this is the nitty gritty:

Result of discussion at Plone Open Garden 2017 in Sorrento, April 2017

Thank you @hvelarde and @tkimnguyen, the descriptions are a little bit vague but I hope there will be a PLIP for this drastic change when time is ripe.

Programming a new portlet is tedious, however there are already a lot of existing portlet-add-ons covering most common use-cases and there's also one allowing to insert TAL-templates, so the need for programming a new one is rare.

What I like about using existing portlets is that they are addable, modifiable and deletable through the web-interface and if one wants to reproduce this prgrammatically in an add-on, only non-intrusive xml-configuration-files are needed, using the GenericSetup-machinery.

About the slowness, it would be interesting to see some benchmarks, if available.
If I understand correctly portlets will become incompatible in Plone-6?
If it's possible somehow it would be lovely, if users can choose which technique they want to use (portlets/tiles etc.), the pythonic modular approach so to say. That allows existing sites to not be forced to do expensive migrations which might outweight the – hopefully provable – advantages of new solutions, and at the same time new sites, or organisations with the needed resources for migrations, can push the progress forward.

Being as modular as possible also allows several solutions to compete with each other, allowing evolutionary growth, which needs various variants qua proposition. I'm sure y'all know that and that nobody wants Plone to become more monolithic, also there can be restraints which won't allow the ideal, just wishful thinking.

Have a great day everyone, Ida

Did you try Products.ContentWellPortlets, any obstacles? IIRC there's also an add-on providing the site-actions as a portlet.