What I did:
I used chrome in an andriod device with 5 inch 720p display to view any pages in news section of plone.org
for instance

Plone welcomes four students for the 2016 Google Summer of Code

We welcome these promising students exemplifying great diversity in geography and topics, and wish them a great Summer of Code!

What I expected to see

The heading line in the news section has to come in next line, if it exceeds to fit in single line, in the described display screen. Though it's working fine for any display screen above this. 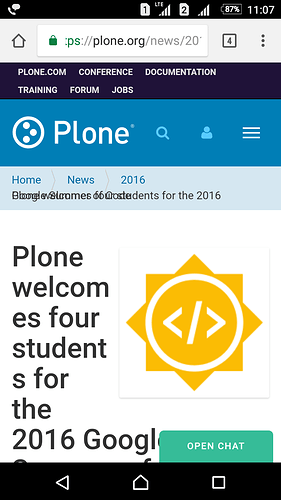 I think I should create an issue but I'm not sure whether it's reported in or not.
So just to confirm Is it known BUG?

@kakshay21 You would report this as an issue in this repository: https://github.com/plone/ploneorg.core/issues

Thanks @sgrepos !
created an issue

@kakshay21 it's great that you're finding and reporting these! (and thank you @sgrepos for helping direct Kumar where to report the issue).

What would you suggest the fix be?

Will probably fit... CSS should be hide all except :last-child (?)

This bug is not of high priority. I've spotted it on 5 inch 720p display. Developers rarely uses their phone for finding things when they have their big screen in front of them.
So if we really want to fix this, we can do it two ways

I expect you'd have to convince a few others before we'd add that to Plone.org. Not saying it shouldn't happen but the more things we add to that site the more of a burden it becomes to maintain and upgrade.

more things we add to that site the more of a burden it becomes to maintain and upgrade.

So then we can go with one... Other than that what's your suggestions??

You filed the issue so at some point the plone.org team will convene and discuss. But you do see that to fix a CSS issue adding and relying on an AMP add-on is a bit of overkill?

Hi, I would like to try fixing this issue . Can anyone guide me to the location of the source code of this

Thanks! It is in github.com/plone/ploneorg.theme