I generated json files from my source Plone site using collective.jsonify and then used a custom script to import my items (including News Items) into my Plone 5 site.

The content actually works and I can view the lead images associated with my News Items. Until I attempt to change a setting on the News Item (without changing the lead image itself) I get a "Wrong contained type" error... as if it can't save the existing lead image back to itself. 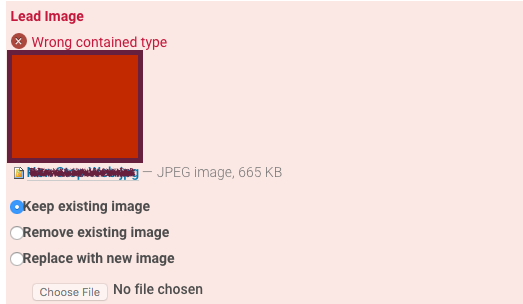 For your reference I've included a snippet that demonstrates how I create my news items from the source json files.

Hi, i have this problem for a long time, i remember me it was a unicode problem in filename or contenttype property.

Look at Namedfile on GIT

Thank you very much @1letter. Based on your suggestion I was able to get it to work. I looked more carefully at my code and "imagename" IS definitely unicode therefore "filename" will be unicode as it should be.

However the example in the doctest expects "contentType" to be set as a plain string. see: https://github.com/plone/plone.namedfile/blob/master/plone/namedfile/usage.txt#L149

So I changed my code to explicitly set the "content_type" value to a string.
It also suggests that I don't need to specify the content type (mimetype), so I probably could have skipped setting the content type and let the code detect it. My "prep_image" method now looks like this:

Note that I force contentType to be set as a string. It now works.

Even though I'm confident that all my incoming values are unicode, to be doubly sure, I also changed the last line of prep_image to explicitly set the filename to unicode.

We were bitten by the same bug here.

It looks like the problem happen when you scale a image, contentType attribute becomes unicode instead of str

and it was introduced in this commit

If @rodfersou mentioned issue is the cause of this bug, this should be solved now:

@rodfersou
Actually, I don't think so. As I understand the case, the attribute will just corrected on the fly - e.g. on next edit or scaling.
However, your PR fixes the situation and there shouldn't be any regressions, even if we need an upgrade step.
Let me know, if you encounter problems and think that an upgrade step is necessary.